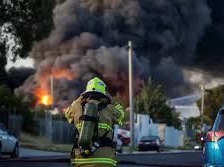 The site of a large toxic fire earlier this week was under investigation by the Environmental Protection Authority over its illegal stockpile of electronic equipment and batteries.

MRI e-cycle solutions caught fire early on Sunday morning, burning for more than 24 hours and covering suburbs near its Campbellfield premises in smoke.

It is the latest in a string of fires at industrial waste premises, which “authorities have allegedly linked to violations of environmental and hazardous goods regulations,” according to The Age.

The site was banned from accepting new deliveries of waste as far back as March by the EPA, and in July, they were issued with a formal warning, in which the EPA threateneted to suspend the facility’s license to operate.

The site was cleared to store 60 tonnes of electronic waste and 20 tonnes of unsorted batteries, although it is unclear how much additional waste was at the site at the time of the blaze.

According to EPA Victoria Chief Executive, Dr Cathy Wilkinson, the company was under “active ongoing investigations” for what the regulator labelled as a “serious issue”.

“After our investigations found issues of non-compliance, EPA issued a Minor Works Pollution Abatement Notice against MRI (Aust) Pty Ltd to cease accepting any further waste until they were within licence limits [in March],” she said.

“After further EPA investigations, the company was also issued a show-cause notice in July demanding MRI provide reasons why they should not have their licence suspended, alleging non-compliance with the conditions of the licence.”

Melbourne Water and the EPA are continuing to monitor the site and any runoff, which spread contaminated fire water into Merlynston Creek nearby.