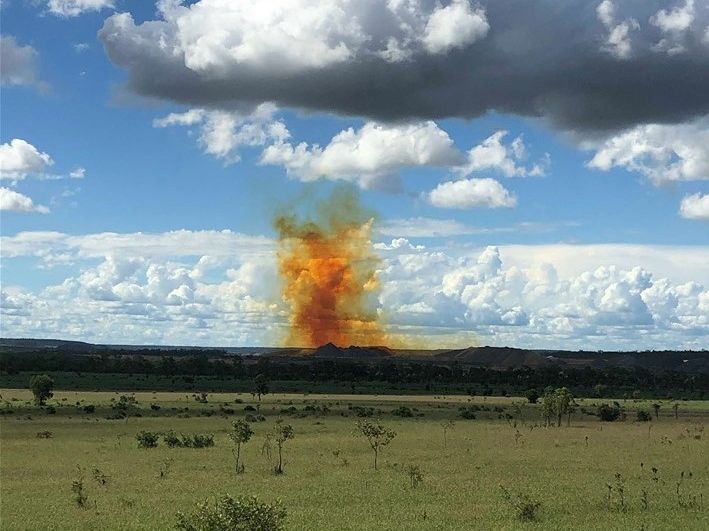 Moranbah in central Queensland continues to make the news only a few weeks after an explosion at the Grosvenor mine site left five workers in hospital. This week, there have been reports of bright orange plumes coming from nearby mine sites.

While the practice of blasting is commonplace in collieries around Australia, the colour of the fumes is concerning to nearby residents.

One resident who spoke to ABC News said that “it was quite confronting because it did initially appear to be reasonably close to where the housing area is and it was a bit surprising to me that that would be happening.

“Some people will shrug it off and say ‘well if you live out here, that’s just what you have to deal with’. But it doesn’t answer the question as to exactly what we may be breathing in.”

Experts don’t believe that the vivid phenomenon is cause for concern, but the impact of long-term exposure isn’t researched.

The operator of the mine, Stanmore Coal, explained that the fume was within an exclusion zone and did not affect nearby residents. The orange colour occurs when nitrogen is combined with oxygen during the blasting process.

Concerns have been raised previously regarding the health of local residents after high levels of PM10 were recorded, and community members wanted greater investigation and measuring of particulate matter, back in 2018.

The Department of Environment and Science pledged to install greater measuring facilities in Moranbah before the end of 2019, but it’s not clear whether that has occurred. The DES website refers to ongoing research that indicates that “particle concentrations have exceeded National Environmental Protection Measures (NEPM) Air Quality Standards since monitoring began in 1986,” but that “annual average PM10 concentrations in most regions are trending down.”